The world's most scientific countries

The October 2012 issue of Scientific American contains a Special Report on the State of the World's Science. On pages 36-37 we find the scorecard of The World's Best Countries in Science. The main entry is a quantification of research papers. The twenty-five most performing countries receive a score, on a 100-point scale, based on science papers in top journals. Now these countries have populations ranging from over 1.3 billion (China) to a mere 5 million (Denmark). To set things straight, I've divided the research output as given by Scientific American by the population, taken from the internet and truncated to the lower million. On a 100-point scale, here is what I got. 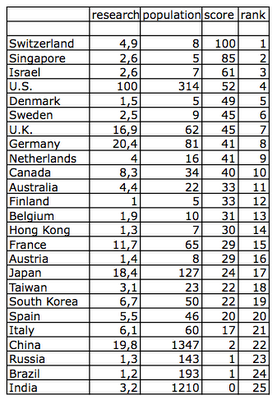 Now we're talking. The most scientific countries in the world are

To me, Switzerland was kind of a surprise. Singapore not, and Israel least of all. Some years ago, I saw Israel ranking first in 'number of scientific authors per head of the population'. Note that muslim countries, some among the wealthiest ones in the world, do not seem to contribute much, if anything, to science.

P.S. Switzerland is also the best performing democracy in the world. Believe it or not (and, seen from within the EU, it is unbelievable): the people rules.