Muslims and science: what NOT to do

Islam has a problem with science. It had none with medieval science, but when science left the Dark Ages, islam stayed behind. There has been no muslim renaissance so far, and there is no reason to expect it soon, quite the contrary. There are hardly any muslim Nobel Laureates, see the extremely short list here. (Skip Peace and Literature which are political and mean absolutely nothing.) Not a single muslim country ranks among the 25 most scientific ones, led by Switzerland, Singapore and Israel—a fair balance of different religious backgrounds. Some muslim countries are wealthier than these three, so money is not the problem. What is the problem then? There is hardly any other conclusion than that the problem is islam, a closed self-contained early-medieval theocratic system designed to last and expand. Well designed, unfortunately. 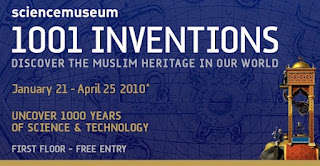 is not the way. Two science historians, who visited the exhibition in Washington, DC, discuss it extensively in the November-December 2012 issue of Skeptical Inquirer. (Full text here.) Their title is

[This exhibit] disregards serious differences between medieval and modern science and warps history to serve a present-day agenda of perfect harmony between science and Islam.

...not accurate... no context... a disregard for accuracy that shades into pure fiction... serious misunderstandings of science and history... egregious mistakes and disregard for professional standards...gross errors...a work of ideology, not scholarship...

... a mass of distortions that serve a present-day agenda. Indeed, the agenda behind 1001 Inventions is explicit—to boost respect for a Muslim civilizational heritage, and to prevent Muslims, especially young Muslims, from feeling as if they are outsiders to modern scientific and technological enterprises. These are legitimate aims. (...) But 1001 Inventions pursues these legitimate aims by setting up a crude counter-myth. In its version of history, a heroic, conventionally devout set of Muslims act as civilizing agents for the rest of the world, laying the foundations for much of modernity. The exhibit is blind to differences between today's science and its medieval precursors, and sets up its myth of a Golden Age precisely to overcome present cultural differences involving science. (...) To further this view, 1001 Inventions presents an absurd picture of science—equated to modern science—taught in medieval mosques, in an environment of complete harmony between revealed religion and knowledge about nature. (...) When traditional beliefs such as a divine designs in nature confront naturalistic scientific theories such as Darwinian evolution, the notion of harmony shields traditional beliefs from criticism. Both in terms of public support and penetration into public education systems, the strongest, most succesful versions of creationism today are rooted in Islamic apologetics. (...)

A Golden Age myth suggests that instead of adopting a significantly different way of thinking about Nature, Muslims need only to reinstate medieval habits of thought in order to become creatively engaged in cutting-edge science and technology. This is exactly the wrong thing to do. [unquote]


True, creationism exists in christianity, judaism, and other religions too. But the results are there to prove that in those religions the inertial mass of ignorance is not critical enough to prevent the elites to creatively contribute to top science and technology. Average scientists are as (ir)religious as ordinary people (see here), but top scientists are predominantly irreligious and free of their religious origins (see here). So this very impressive list of jewish Nobel Laureates need not imply anything religious. A famous example is Einstein, who did not believe in God, whom he quoted frequently as a metaphor. The absence of an irreligious elite seems to prove that getting free of islamic inertia is a hard thing. (Read Churchill on this matter.) What would you do if —in spite of Article 18 of the Universal Declaration of Human Rights—apostasy was punishable by death?