Most rare: mathematical proof of the golden angle

Among the many questionable claims concerning the golden number is this one: that φ is a fundamental ratio that is almost as ubiquitous as π (Gardner1961 p.89). While π does impose itself everywhere, it is quite possible to graduate in mathematics without ever running into the golden number —I did. In secondary school it had been mentioned in the construction of the regular decagon, and that was it. (And even then, Pythagoras would have done as well.) So, where are all those golden problems forcing φ upon you? I'm proud to present the one I eventually was able to dig up:

As the title shows, it deals with a mathematical model of a sunflower head. Sunflowers are among the most popular icons of golden and/or Fibonacci lore, and it is universally believed that the "golden angle" is at work here. This angle (1-𝜑 times a complete turn, being some 137,5°) would somehow provide the most efficient packing of the seeds. One is invariably presented a very uniform covering ruled by the golden angle, accompanied by two poor alternatives with angles slightly smaller and slightly larger than golden. 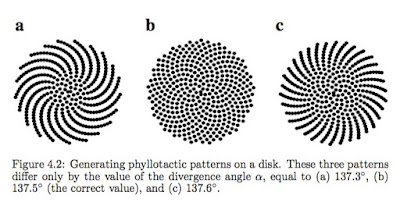 (This one from Lindenmayer & Prusinkiewicz, The algorithmic beauty of plants, p.101.) If an argument is provided, it goes as follows: angles that are a rational fraction of a turn result in very poor coverings (reduced to a few spokes radiating from the center), and therefore the golden number, being the most irrational number, is the best choice for the angle. This reasoning cannot be right, because on the one hand rational numbers do provide excellent coverings and on the other hand the golden number is but one of a family of equivalent numbers, all of which are equally difficult to approximate rationally. So instead of the traditional triad we present a different one. Each figure contains 1000 points, viz.

for n=1,2,...,1000 where α is a fixed angle. The efficiency of the covering is measured by the squared minimal distance (SMD) occurring between these 1000 points. It would require a sharp eye to make out de visu which of the three coverings is the most efficient. To stay in line with the traditional triads, the middle figure is the golden one, with α=1-φ=137.507...°. It is preceded by an angle of 99.5°, which is very far removed from the golden one, and followed by an angle which is 89/233 of a turn, at 137.510...° slightly bigger than the golden one. The first covering is slightly worse than the golden one, but the third, in spite of being generated by a rational number, is better than gold. So our third example falsifies two claims at once: that the efficiency diminishes when the golden angle is ever so slightly increased and that rational numbers are terribly inefficient. The rational number 89/233 beats the golden champion! Also, why does no one ever mention 99.5° (some 40° removed from gold) while it performs well enough to cheat any golden numberist?


These examples show that the golden angle does not provide optimal packing, at least not in this particular mathematical model of a finite sunflower head. (Real sunflower heads typically have some 1000 seeds, and may go as far as 2000.) Ridley's theorem, however, deals with infinite sunflowers. Stripped to the pure mathematics, it may be stated as follows:

So yes, a mathematically inclined sunflower, decided to add its seeds along a parabolic spiral (though there are better choices) and hoping to live eternally (not just a poor 1000 seeds, in which case see above) has no better angle to choose than the golden one!

Ridley's Theorem is very skilfully composed out of four lemmas, the key tools being provided by the theory of continued fractions. Find it, somewhat elaborated, and restricted to the purely mathematical aspects, here.  Graphs and computations are courtesy of GeoGebra 5; I couldn't have done without.